How to play Rebels 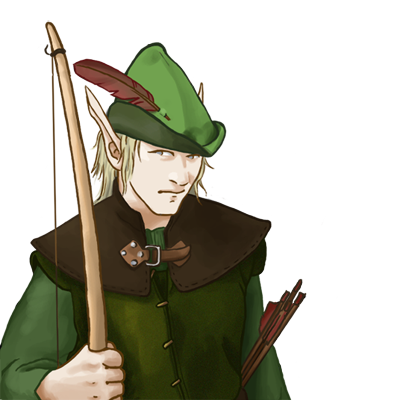 Elvish Fighter is a cost efficent warrior of the rebels. Similar to Elvish Archers, but much better in melee combat.

Elvish Scout is very fast, moving quickly even in forests. Good for capturing villages and as a support fighter.

Elvish Shaman is a great support unit, that can heal, slow down enemies and block others in forest hexes.

Wose is a tree-like creature with high HP, but poor defenses, that can heal itself.

Merman Hunter is a warrior and scout connected with water.

Mages are in both rebel and loyalist armies. They provide fire damage in their magical ranged attack.

On the maps with a lot of water, recruit one or even two mermen hunters in the first turn.

Choose a leader wisely. Good leaders might be someone with good abilities, if you wish to use him/her on the frontline in small maps. White Mage, Druid or Elvish Captain will do just fine. Good healer is more effective than shamans and can also remove poison. Leadership will make your units more powerful. You can also pick up Elvish Ranger if you are on map with lots of forest hexes.

Rebels have excellent defense in forests. A primary consideration for your strategy should be holding and leveraging available forest hexes. Your faction is largely compromised of the neutral Elves, but the Mage, Wose, and Merman are Lawful. You will be strongest in the day, but if your opponent is also lawful it is usually best to fight at night.

Rebels have an abundance of ranged attacks in addition to the Dextrous trait on Elves. This enables frequent chances to attack without taking retaliation damage; it also guarantees any opponent attacking you will take some damage in return.

Second only to the Drakes, Rebels have good mobility. The Scout has the highest level 1 movement in the game, and all of your Elves have the efficient woodland movetype. Attempt to take an early village advantage and later ZOCing your opponent's weakened units.

The Elves bring multiple special abilities to the table. The Elvish Captain provides access to the Leadership trait, which can prove the difference when fighting an enemy at their chosen time of day. Shamans provide +4 healing and the ability to slow enemy units, a cornerstone of the Rebel strategy; their 70% defense in forests even allows them to provide effective front line support.

Rebels have access to blade, pierce and impact attacks, same as any other faction. However, their mages can use fire, while level 2 units (white mages and elvish sorceress) can use arcane attack.

Generally, elves does not have a lot of hitpoints, so healing in villages to full health is quick. Use scouts to get to the distant villages. Fighters are good for holding them. Use woses more often on maps with limited number of villages, because they do not benefit from them and cannot defend them effectively.

Your main problem when fighting loyalists is their spearmen. Relatively cheap, relatively tough, solid damage dealers (with a ranged attack and a special ability to boot) spearmen are difficult to defeat without woses. But with woses, the battle changes: it will be the loyalist opponent who will need to find ways to defeat the woses’ massive pierce resistance, high HP, damage and regeneration. Therefore, your tactics will be centred around the wose; your other units will provide the necessary mobility, village holding, and special extras to make up for the woses’ disadvantages. If it’s not already obvious: the wose is slow, and has abysmal defence on villages.

Your enemy will spam a mix of cavalry and mages to deal with your woses, and spearmen (along with horsemen) against your other units. You may also see some heavy infrantry or fencers thrown in. Your prime target will be horsemen, as they are expensive, vulnerable to archers, but extremely dangerous to all of your units (barring the wose of course). Fighting at night is obviously a good idea; at day you should play neither defensively nor offensively, instead making use of forest and slow to survive the loyalist onslaught, and keeping the pressure on your opponent. Remember that your woses are also lawful, and will easily slaughter spearmen/bowmen/HI in the absence of mages and cavalry. The latter can easily be killed by your neutral elves, even at day.

Mirror match is always dangerous. Enemy can use the same units and strategies. Forest is great for both. If you cannot reach a forest hex, try to make sure your opponent will not get there any time soon. Use ZOC to make sure your enemy will not get to the forest hexes. Some units, like woses, can be dangerous, but they can be easily killed with fire. Make a scout or two to know what is your enemy doing.

The Northerner units are your antithesis: tough instead of weak, melee orientated instead of range orientated, and fast where you are slow; slow where you are fast. When fighting them, you need to be aware of their ability to outmaneouvre you on hills and mountains—but conversely, they will struggle to reach forested hexes. Your strategy will require careful use of leadership and unit traits: without them you will not be able to do sufficient damage to kill an orc or troll outright. A strong/dextrous archer/fighter will do 20% more damage over base, and this rises further with leadership. Since grunts have 38 base HP, the extra damage will often mean the difference between a dead grunt and a still-dangerous grunt (to your shamans, mages and archers).

The Northerner units have two special abilities you will need to counter: poison and regeneration. You need to recruit shamans and keep them behind your front lines—that way the assassins’ poison won’t activate. Since poisoned units lose 8HP per turn, while shamans heal only +4HP per turn, this is a good trade-off. As for trolls, the trick is to take out their supporting units first, and then focus your attacks on them en masse.

The Undead have very specific resistances and vulnerabilities, so many of your units are less useful. However, undead have multiple different units that can be used against you. Fighting dark adepts and skeletons is much different. Skeletons are resiliant to pierce and blade attacks, while dark adepts can fight elves in the forests. Undead can also attack your units with poison, so you need to eliminate all the threats.

Terrain denial is the most important aspect of this matchup. His Poachers will be trying to take your forests, while denying his hills and mountains is critical. Note that although you enjoy maximum defence on forests, it is generally preferable to occupy a hill/mountain hex even if there is forest nearby: dwarves have only 30% defence on forest, whereas you have 50% defence on hills. If you occupy forest instead, you will have the same defence as the dwarves—and they’re tougher.

Shamans and Mages shine against the Dwarves. A Shaman in a forest hex has the defense and health of a thief with no physical vulnerabilities, and if she ever slows an Ulfserker you get a free kill - not that her slow is wasted on Fighters or Gryphons.

Speaking of which, another effective strategy is attrition: use your slow to cripple the enemy’s hard hitting melee units, make use of healing to recover from the damage you receive, and feel free to take pot shots at your opponent when you can.

Priority levelups continue to be Druids and Captains. Healing and Leadership greatly enhance the Elves' capabilities; the captain essentially negates the Dwarves' armor. The Knalgans don't have access to these abilities, so they will provide a large advantage.

Drakes are an incredibly offensive opponent: be careful of their extreme mobility and high damage. They want nothing more than to fight you on open ground, where they will massacre your fragile Elves. Denying terrain from Drakes is irrelevant in this matchup, but ensuring that you have the best possible terrain for key fights is critical. Their Saurians bring additional threats - magical attacks to force you out of the forest, and Skirmisher allows them to assassinate wounded units in your back line.

Fortunately, you have the tools to turn the tide: your Mages, while impotent against the fiery Drakes, are a key counter to their Saurian underlings. You have an abundance of Piercing damage, which the Drakes fear. Your incredible defenses can turn the tide as the easily hit Drakes fall under a flurry of arrows as their blows fail to strike your forces of the forest. You will likely aggress at night, unless he has a horde of Saurians.

Dunefolk is similar to Rebels in many ways. So, gameplay might be very similar to playing rebels. Dunefolk is very dangerous in desert hexes, but they are good in other terrains as well. Dunefolk can use their cavalry, as well as other units against you. Some of their units are not very dangerous against rebels, while others can kill your woses with fire or defend important hexes against your attacks.

How to play Mages