How to play Dunefolk

All informations is made for Wesnoth 1.15.x and later. Dunefolk/Khaliphate is much different in 1.14 and older versions. 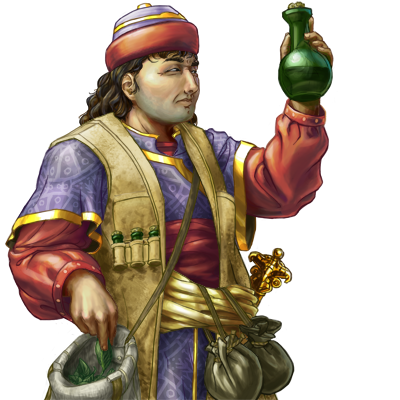 Dune Burner is the only unit with fire from the Dunefolk faction. Use him to attack skeletons or woses. Compared to mages, they are generally better in defense, cheaper and not as strong when using ranged attack.

Dune Herbalist can heal himself and all adjancement units. Basically a healer with melee impact damage.

Dune Rover is a good, balanced fighter, usable in most situations.

Dune Skirmisher is your fast unit, important in difficult fights against important targets.

Dune Soldier is the Dunefolk version of the grunt or wose. Strong, melee oriented unit for both attack and defense.

Dune Rider is very fast on flat terrain. They are simply horse archers.

Naga Dirkfang is both melee and ranged attacker, that can be good even on dry lands when leveled up. Both attacks are blade.

On the maps with a lot of water, recruit one or even two naga dirkfang in the first turn.

Probably the best possible way is to go for Dune Apothecary, who can heal wounds, but cannot remove poison from friendly units. Some units, like Dune Shieldguard, can be useful only against some enemies. Dune Explorer is your guys, if you need a fast leader for some reason.

Dunefolk is a new faction in Battle for Wesnoth. They have variety of useful units, but you can also mass a lot of their cheap and powerful Dune Rovers to ensure good progress. They have multiple ranged attackers, while some can do a lot of damage in melee combat (Dune Soldiers). Remember, that you can always heal your units, but your Dune Herbalists are very different from other healers, because they can heal themselves. Upgrade at least one to get a powerful level 2 healer.

Dunefolk defend well in mountains, but they are not very mobile there. However, they are good in desert sands and beaches. They can be good against any enemy, if proper strategy is applied. They do not like mages very well, so use your fast horse archers (Dune Riders) to hunt them down on open plains or use Dune Skirmishers to chase them, if they are not well protected from every corner.

Dunefolk have access to healing via herbalists, charge with powerful Dune Cataphracts and together 5 (!) units with skirmisher speciality. Dune Soldiers can became very defensive, very offensive and also very motivating with leadership, if they get to level 2. While this looks nice, Dunefolk have also disadvantages. They are not good in forcing enemies to retreat from their favourite terrain. With no magic attacks and very limited poison and marksman attacks, it is hard to defeat factions line Knalgan Alliance.

Dune Skirmisher is good for finishing enemies and that way gaining lots of experience. They need less experience than others to promote to level 2, so your strategy can be focused on using Dune Striders, that are stronger and can slow in ranged combat, or with Falconers. Falconers can make enemy unit weaker, if placed properly.

Dunefolk have access to blade, pierce and impact attacks, same as any other faction. However, their burners can use fire attack.

Almost every unit in Dunefolk army is good in defending villages. You need villages to help you with poison, because your healers can cure it only on level 3. Riders can move to enemy villages quickly and use their arrows to harm anyone who will try to capture it back. Universally usable Dune Rovers are the best guardians of the villages.

Loyalists and Dunefolk are similar. To defeat them, you must use your strenghts against their weaknesses. Both armies have access to cavalry and numerous foot soldiers. Loyalists have more melee units, while you can use your fast units with ranged attack to engage them first.

One of the main problems are mages. They can be killed very fast, but they can also kill your units quickly. So, if they can defend mages, there is a big problem for you. With army of skirmishers, you can do a lot of damage and get out of there if needed.

Loyalists are also known for their simply spearmen strategy. Only your riders are vulnerable to them. Also, with lots of spearmen, your skirmishers are useless. Dune soldiers can defeat spearmen, bowmen, fencers and cavaliers.

Dunefolk can fight rebels in an interesting battle. Two factions with good ranged units, healing and even the (more or less) balanced fighter costs 14 gold in each faction.

Everyone know, that rebels love forests. Can you force them out? Probably no. At least with basic units. Elves does not have complicated vulnerabilities, with exception of a wose. But will they use woses if you can cut them down with your blade weapons and also burn them with burners?

Elvish fighters might be dangerous. They are good against your skirmishers, burners and herbalists, but they are generally weak against your dune soldiers. So, logically, rebels will use someone good against your soldiers. But who? 4 elvish units use mostly blade and pierce damage, so they will need to attack your strong, sturdy soldiers with mages. Kill mages, fighters and everyone else with a combination of soldiers, rovers, skirmishers and herbalists. You will need also some burners for extra ranged damage and to prevent enemy from using woses. As always, dunes rider are important to get villages, but they can be attacked by faster elvish scouts and gravely injured or slowed by archers and shamans.

Battle plan: Kill elves outside of forests. Shamans might be a priority with archers and mages. Use soldiers as a front-line units and reinforce them with cheaper rovers and herbalists. Get villages and if possible, fight far from forests.

Northerners are cheap. Cheaper than you, but generally similar. They can prepare attack with lots of strong units, so this is generally a balanced scenario.

As always, some units are better. As Dunefolk, pierce and blade is no problem, you have anough of it. But the troll whelps are resistant. While generally it is not very hard to hit troll whelps, they regenerate even when fighting and getting them out of the mountains might be complicated. However, there is a unit, you can use - dune burners.

Most of the northerners are good only in melee attack, so shoot them with your multiple ranged units - rider, burner, rover, naga dirkfang and if needed (mostly to get some free experience), even skirmishers.

Because you are alive, poison will harm you a lot. For dunefolk, it is very hard to get a powerful level 3 healer, who can cure poison, and northerner player knows that. He will probably make several assassins to harm your forces. Deal with them, when they are in the open places. Assassins have vulnerabilities to blade (-30%), impact and pierce (-20%), so hit them with your units, that are generally good in these. Remember, that 1HP assassin can still poison any of your units. To deal with them, soldiers looks a good idea, but they do not have any ranged attack to retaliate. So, rovers can be better in the hunt for assassins.

Undead skeletons are good against your pierce and blade damage. Dark Adepts can make a lot of damage and ghosts can attack your lawful/liminal/neutral units during the night and heal themselves. So, undead are strong. On the other hand, you have units, that are especially good against them. Keep a good mix of units to cover your weaknesses.

Because all of your units are living, undead (and orcs) will try to use poison. Ghouls are a problem, because they can force your units to flee, you can cure your units only with level 3 healers and 3 your units are vulnerable to poison. Burn them or shoot them with ranged attack. That unit is surprisingly strong in defense, so you might need to focus fire.

Your strategy is centered on Dune Burners. You simple need fire to defeat skeletons, ghouls and to retaliate against their strong ranged attack. Burners are not invulnerable, so mix them with other units and of course, try to get enemy villages. Because of your burners, it is possible that you will not face many ghosts in this battle.

This is tough, maybe the most frustrating match in Battle for Wesnoth. Defeating knalgans is problematic for a number of reasons.

First, they are much better and faster on hills and mountains. They can easily attack your units and exploit your vulnerabilities. Last and not least, you do not have magic attacks. While you have access to poison and marksman attacks, it all comes with level 2 units, and you can always upgrade to unit that might be better or more needed.

You have to use your solid melee attackers to fight dwarves and outlaws - but they will fire at you with poachers. You can also try to find a perfect unit against poachers, but you will find none in your arsenal. At the end, both factions will fight with a strange mix of units. Dunefolk can use classic blade/impact/pierce attacks, but dwarves are good against them. So even your nagas with blade attack will have limited use. It is possible, that enemy will recruit a fast moving gryphon rider, who can also make things worse, if he collect some villages from you. To make it even more horrific, even cheap thieves that costs only 13 gold can kill your fighters and healers at night.

So... what can you do? Mixing units a lot and using the cheapest and most versatile unit you got - dune rovers. Your biggest advantage is healing, so try to heal more than 1 your unit every turn. Also, you will need to upgrade dune soldiers to get a really powerful unit - or a captain with leadership. In general, your units are faster in flat plains, so you can use hexes just out of reach of the dwarves.

Drakes like fire. Saurians do not like fire at all. Your only unit with fire is terrible against drakes and wonderful against saurians. So, as many others, you have to deal pierce damage to drakes and blade to saurians.

Drakes do a lot of damage and none of your units is resistant to fire or anything else. In comparison, dunefolk units are more "normal", while drakes and saurians have both strenghts and weaknesses. Make sure to use more units than drake player, because in 1v1 their units are more powerful.

Mobile drakes, crashers and augurs will be your enemies in this battle, but they can (same as you) change their tactics if needed. Drakes can use units to exploid your vulnerabilities. You should know, that you have multiple good units against saurians, so enemy will probably use mostly drakes.

Will some drake gliders come to your territory to steal your villages? You bet they will come. Skirmishers and riders are the best way to stop them. Do not forget to use ZOCing with your units.

Strategy to defeating dunefolk as dunefolk is simple. Dunefolk have some advantages and disadvantages, but it have also a good unit for everything - dune rover. Other units are good as well, but there is no single good target for your skirmishers.

Because your will probably see a lot of rovers, take also units who are good against rovers - dune soldiers. Especially with healing from herbalists. In fights between two dunefolk leaders, speed is important - and it is possible that more riders will be used. Do not let your enemy have more mobile cavalry than you have.